The Names of the Hare

This Sacred Plot (This Rhubarb Republic)

A videopoem about a wartime accident in Norfolk.

A locomotive meditation on war and tourism.

Our Fathers Dug For Coal

We used to be an industrial nation, and our fathers dug for coal.

A video about the North Yorkshire moors and the Cold War.

The land juts into the German Ocean, a skull-shaped vanguard fighting a losing battle against the waves. Here, it's hard to determine where the land stops, the sea starts, and the sky begins, and all conspire against unwitting travellers, landlubbers and sailors alike. Boats lie beached on sandbanks and mudflats, while family homes perched on cliff tops have been abandoned and allowed to tumble into the sea.
Villages are lost, and harbours silted up; where there's now sea, there once was land, and where there's now land, there once was sea. Cley-next-the-Sea and Wells-next-the-Sea are no longer next to the sea - the settlements now lie a mile or so inland. Dunwich has all but disappeared, and Happisburgh is fast disappearing. Millions of pounds will be spent to ensure the second homes of Southwold and Aldeburgh don't suffer a similar fate - where would the metropolitans go for their long weekends?
Nature is transcendent over Man; bad King John's treasures are lost in The Wash, fortifications are swept away like sandcastles. All along the coast, spongy remains of ancient forests are exposed at low tide, and petrified wood shards and fossilised shark's teeth litter the beaches. Ancient trackways and trading routes connect prehistoric settlements to down-at-heel holiday destinations.

Northsealand doesn't feel like part of Britain; the land has more in common with the coastal margins of Northern Europe, and the people who live here are defiant and independent. They exist in a liminal zone, eking out their living in industries which are disappearing; a shortage of fish has meant the imposition of quotas and regulations, while fishermen's cottages have been turned into holiday homes and guest-houses. Tourism has taken over from trawling. Younger people are leaving for something and somewhere more secure. The villages and the towns are stagnating.

This coast was the front line in the defense of the realm. Belgaic tribes conquered it in the Iron-Age, and the Romans established forts along the shore. The Angles and Saxons plundered the area. In more recent times, sea-battles were fought off its shores, and Martello towers were built as a line of defense from Aldeburgh to Canvey and beyond. Derelict pill-boxes and the remains of military vehicles from the Second World War can be found at regular intervals, half-submerged in the shifting sands. Orford Ness and Shingle Street hold their own dark secrets from that time, but have now succumbed to the ravages of nature.
Secret weaponry and toxic warfare have given way to wildlife and a largely undisturbed environment.

Northsealand is not just a geographical region with its borders set by rivers and the sea; it's also a state of mind. Although these topographic boundaries in many ways inform the mentality and identity of the people who live there, it's the mental boundaries and self-imposed pigeon-holes which form a large part of the collective character. Just as East Anglia is in many ways isolated from the rest of the country, so those living on the coastal fringes are in turn isolated from the rest of the region. Many of the Northsealanders hardly ever go to the fleshpots of King's Lynn, Peterborough or Norwich, simply because there's no good reason for them to do so. Their lives are self-contained, self-sufficient. 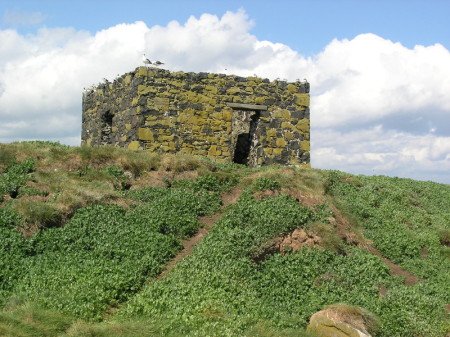 The Farne Islands, just a few miles off the Northumberland coast, have long been a destination for hermitage and pilgrimage. Saint Cuthbert, who preferred the company of birds and donkeys to that of humans, had a little cell on Inner Farne in the seventh century, but now the only pilgrims are those intent on photographing the bird life - the arctic tern in particular is a popular attraction, as are the shags and puffins, and it's often impossible to move for birders and twitchers with their ridiculously large equipment.

The first part of this piece is an incantation naming the various seabirds sampled from an old bird identification LP , the second part is a jig performed by Saint Cuthbert whilst being attacked by arctic terns, and the final part is an arctic tern beatbox.

God Spede the Plow by Eshman